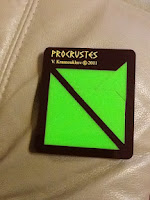 I bring you two more puzzles from my long night of packing puzzles. Both of these puzzles were made by Vladimir Krasnoukhov. The Black Square puzzle is one of those 'add a piece' puzzles. Procrustus is one that requires you to place the pieces in a different configuration. Black square has five pieces, Procrustus has four. Ok. So now that you know the differences (aside from color that is) I'll tell you the similarities. 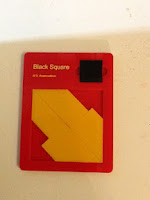 There's only one. Both puzzles are DROP DEAD EASY!!! I did Black Square first and it took me less than three minutes! Are you as shocked as I am? Even more shocking was the time spent on Procrustus. It was less than thirty seconds! I kid you not!

I lie. There are two similar things about These two puzzles. The other is they are both really good puzzles. Seriously. Sometimes simple is fantastic. After I solved them I handed them over to bug and she fiddled around for quite a while trying to work them out. Maybe twenty minutes on each one. These are two fantastic puzzles for the novice puzzler. They are easy enough done that my coworkers who I could coerce into playing solved them in less than ten minutes and one of the guys even asked me today to borrow the square one so he could use it in a workshop he was running.

When I can get one of MY co-workers to ask for a puzzle it's a winner in my book!
Posted by Roxanne Miller at 6:00 PM