You see that pile of rings down below. They all come from the slightly puzzled minds of Bram Cohen and Oskar van Deventer. Seven they have made so far and I'm sure that's not the end of them.

I got my first one in 2009 and haven't looked back. In 2010 I bought a few more and then this year I went to Oskar with rings on fingers hoping he would be able to tell me which one I was missing. Sure enough-he said the dark blue and the pink! Nice way of remembering which is which. Color coding. I love it. I'm a big time color coder myself!

The green ring I bought for bug in 2009. Green was her favorite color then so I thought it might get her interested in puzzles. I should have known better. She was only interested in taking it apart to see if mom could put it together again. I'll tell you, it was a real pain to do. All of these so far have been a real pain. They aren't your usual for or six band rings that's for sure. If you want a bit of a challenge, then you won't go wrong with these rings.

The red one I got last year and it is relatively easy (compared to the green and the yellow.) This one is a bit loose so I had no choice but to solve it. When I snipped the connector band it just fell into a mucked up state.

Not all of these rings have been taken apart yet but eventually they will be. As you can see, the one I'm working on now is that big yellow one. Not by choice though. When I took them out the other day to make a YouTube video I accidentally bumped it and it fell off my desk! So now I've a bit of work to do before I can wear it again. and let me tell you, this one is a royal pain! I worked it for just over three hours yesterday and managed to get two of the bands lined up. Ugh! You'll note the thread on them...I don't want any more accidents that will take me hours to fix. I'd rather take them apart on my own terms.

The white ring was Bram's exchange puzzle this year. But for anyone who is interested in purchasing it, this one like all the rest are available on Oskar's Shapeways page.

All in all I'd say if you're up for a challenge these are the way to go. 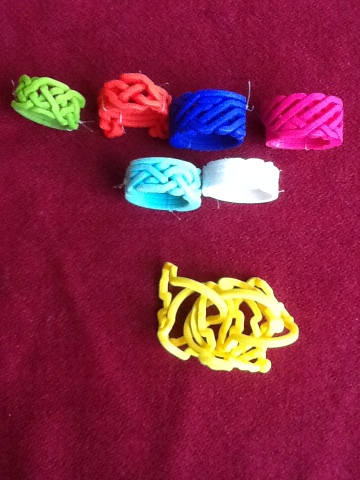 Posted by Roxanne Miller at 9:56 PM