Box with a tree 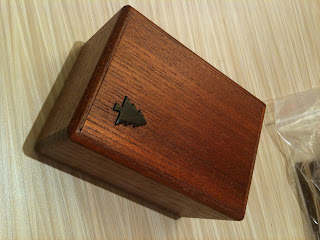 Today's puzzle is not mine, but I had the opportunity to play with it for a while and since it got one of those big toothed grins from me when I solved it, I thought I'd let you read about my pleasure with this one.  My friend Otis brought this one down from Beijing with him and at lunch today, we had a puzzle play date.

Last year Otis came over to my office and he opened up the Little Tree within a matter of seconds.  I have to say, I was disappointed when he did it.  I wanted to solve the puzzle, but I also was saddened by how simple it was.  But he enjoyed it and as long as someone did, that's all that matters.  No, I'm not being 100% truthful.  I too enjoyed the puzzle, just not as I wanted to.  I mean, it's not fair when someone else solves your puzzle before you is it?

Ok, this back story has a purpose.  Otis enjoyed that puzzle and others from the Karakuri group so much that he had to go get some of his own, and Box with a tree was one of them.  I was glad he did,because I had the opportunity to play with it.  I watched Otis open the puzzle, and was surprised by how simple it looked.  At the exhibition/competition venue I gave it a miss.  Later when we were sitting down to lunch, I went ahead and gave it a go.  Not so easy.  I fiddled and fiddled and got no where, then suddenly out of the blue the puzzle opened.  Ha!  I knew what I did.  So I shut it up again and blast!  I couldn't replicate my moves.  The box was locked tight.  We played some more, we talked some more, we ate some more.  And all the while I tried to get that box open.   Otis to the rescue.  He gave me a few hints.  Very slowly. (I guess he thought I was being thick!)  And bam!  Opened again.  Wow!  What a tickle that was.  Back to the big toothy grin!  It's a great little puzzle, and I'm glad I had the chance to play with it.  Thanks Otis!

Warning: opened box below, proceed at your own risk. (But it really won't help you much-all the puzzle mechanism bits are very securely hidden beneath the box in the box.) 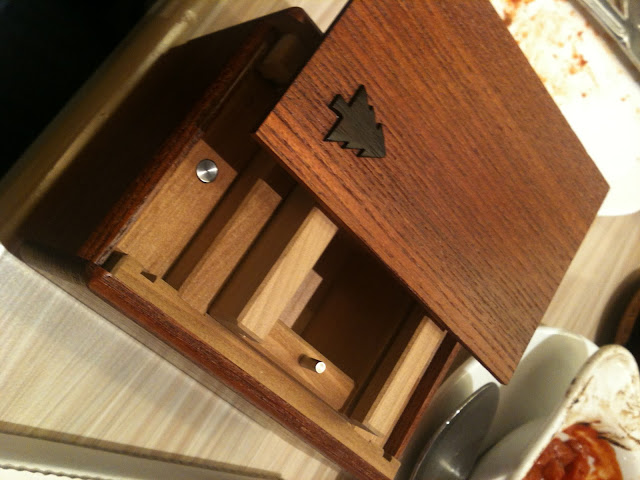