Today was a late breakfast meeting with Kim (WCA rep), Calvin (HK Nowstore), Uwe (Meffert's), and yours truly. We got to see a few up and coming puzzles from Meffert's (hint: one is an older idea finally come to life. I've lusted after it since I saw the first photo of it. And like Schultz, "I know nuting")

After a bit of play we started to talk business. Boring stuff really. Who is judging what competition, who is giving out what prize, where everyone sits, t shirt sizes, puzzle displays. Boring stuff.

Kim went off for an interview, Calvin and his wife went off for work and Uwe, Katherine, and I went for lunch and a bit of shopping.

At two I had an interview with a local paper and drug Uwe along. I mean why not? He's given me so many of the puzzles in my collection over the years it would have been rude not to. I talked for the better part of an hour and then handed the reporter over to Uwe. He explained the pillowing of his new pyramid (because I just told the reporter that the pyramid is one of my favorites-it really is) and then went on to talk about why HK and when he started. That sort of thing. While all that was going on Kim was working on solving my exchange puzzle!

We parted company around 3:30. Uwe went to get his hair tamed and Kim and I talked security for the exhibition.

Once again I leave you with photos of the day. 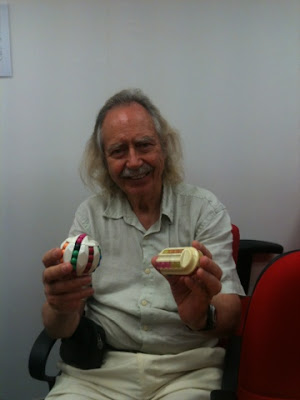 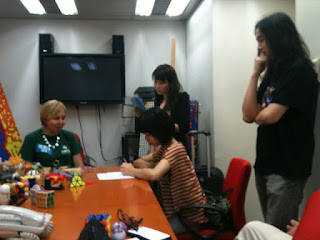 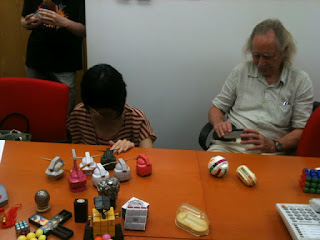 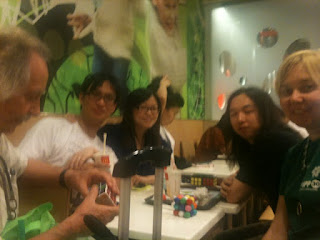 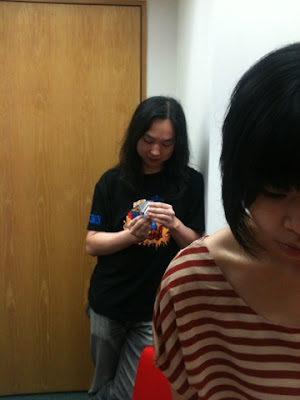 Posted by Roxanne Miller at 7:52 AM