Every now and again I forget to put a puzzle in my bag but I've always got my iPad or phone with me. How sad that I've become so dependent on technology that I would write that?  What you see here are the games I have downloaded and the books that I have purchased. I'm writing about them because I met the Grabarchuk family at an IPP (I think it was Berlin but as usual can't remember.) and I thought they were very lovely gentlemen.  I purchased a puzzle book at the time on an 'honor system' i.e. I paid and hoped it would get mailed out before the end of the year. As luck would have it, I had the book rather quickly and enjoyed attempting some of the puzzles in it.

Last year, I saw they had posted on Facebook that they were giving away  the Christmas puzzles and I thought why not.  I downloaded it to see what it was all about.  I'm glad I did.  It was good fun and a nice way to get into work.  When Valentines day came along they again posted a free book and I again downloaded it.  Another nice fun bit for the train into work.  I later decided to do an internet search can see what else they had available and found a bunch over on Amazon. I started making purchases because I'm first and foremost addicted to all things puzzling.  But really, this was another attempt to get the bug interested in puzzles. I mean she loves books as much as I do and I thought she might want to have a go at these.  I was pretty pleased when I brought my iPad to Disney one day and she and her cousins spent all the ride wait time playing with the puzzles in the books. I loved it because the beginning of each of the books are easy enough for kids to work out, but become progressively more difficult as you work through the book.  So not only are these good fun for the kids, but I enjoyed them as well.  I don't own a Kindle, but I do have the kindle app on my iPhone and iPad and they work pretty well on both.  Heck, Bug has even downloaded some to her phone to play on the bus.  Can't go wrong when that happens. 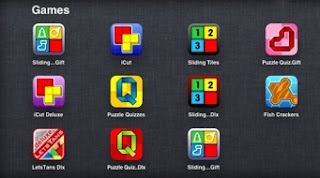 As for the games, I've enjoyed them a lot as well. More puzzles, but these are made specially for the iPhone/iPad.  They play a bit nicer and are interactive.  Again, a nice bunch that started out as installing the lite versions then going all out and buying the real ones.  You can see that I still have a few lite's up there, I just haven't gotten around to purchasing the full version of the missing apps yet.  One of these days when I run out of other puzzles to play I will.  Same goes for the missing books.

In the mean time,I highly recommend these to any who are interested in a nice set of graded puzzles.