I saw this puzzle on someone's blog (http://magicpuzzles.org/wordpress/?p=1364) a while back and decided I wanted one. That's the problem with blogs. I read them and then I see things I like then I have to go buy them. Not the best way of doing things but it keeps me in puzzles anyway.

So this one is pretty clever. More clever than I (aren't you just do tired of reading that?) This one is a moon. But it's also a cross. There are only seven pieces to it. Not too many. Easy enough to solve right?

Well, yes and no. See I brought this one on the flight with me thinking I would solve it rather quickly. After all, it's only seven pieces. But as with all puzzles I think are easy-this one wasn't. We got into Doha and I still hadn't solved it. Maybe it was too much wine in flight and too little sleep. Maybe it was too much Big bang Theory. Maybe it was just a hard puzzle. During the first 13 hours of the trip home I kept coming back to this one and just couldn't do it.

After the layover from Hades, I picked this puzzle up again on the last leg thinking those curvy bits would yet again cause me major headache. Much to my surprise I solved the puzzle almost as soon as I dumped the bits out.

My overall verdict? It's a walk in the park. I say this because after the second attempt at solving it I had to dump it again and again. See, I don't trust myself to think a puzzle is easy and have it be so. I need to keep testing myself. Well, I've done this one quite a few times now so I officially deem it to be easy! 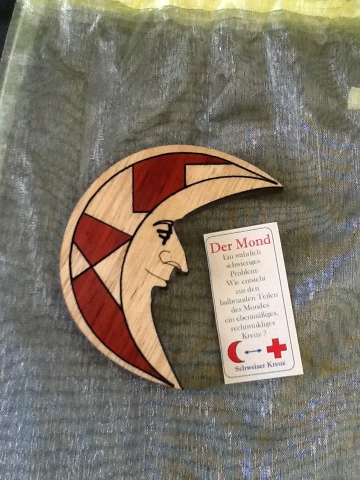