And if those names mean anything to you, you're brilliant!  Both puzzles are designed by B. KpaCHoyxoB And that is a mouthful too.
As with many others I've been reviewing this past couple of weeks, I purchased these at IPP.  Here I go again with the 5 ducks (aka the toilets) That puzzle knocked me for such a loop I had to have these as well.  I was sharing Dave's table again this year and Turned around and there was Vladimir.  I snagged up about 6 puzzles or maybe more and dumped them under the table before heading out to puzzle hunt. 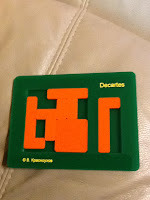 The first: Decartes was a nice one.  I didn't have any idea what it should look like in a solved state, and only purchased it because I liked the name.  I was on my night of puzzling/movie watching and played half heartedly with this as the movie was actually starting to get good (I basically stoped watching tv and movies and such in 2006 when I decided to start studying again-I've missed out on a lot so even the old ones are good to me!)  As I was fiddling, I was shocked to see that I had solved it!  There was a twist to this puzzle that I really liked.  I would highly recommend it to fellow puzzlers and non puzzlers alike.  This puzzle has 5 pieces to it: 4 irregular shaped pieces and one perfect square.  A real challenge to the brain when you first look at it. 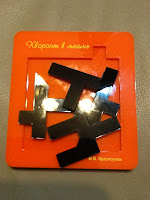 The unpronounceable puzzle is a different story.  There are only 4 pieces and they are in very strange shapes with not all the edges being square.  There is also an added bite taken out of the frame.  I had dumped this into its bag when I purchased them and didn't look at it after that at all.  When I pulled it out to play, the bits had fallen out of the frame so I had the joy of solving two puzzles. One with the added bite and the real solution.  Believe it or not, the real solution was solved faster than the transporting solution.  The angular bits really threw me and I certainly wasn't thinking as I should have been.  I would have to guess for me to find both solutions took around 30-45 minutes of puzzle/movie time.


One of these years I might look at the watch I wear.  But life is so much more fun telling time via bathroom breaks, in between candidate times and distances between train stops.  Isn't it?
Posted by Roxanne Miller at 8:45 PM