One of the great joys of this hobby of mine is the people. They are always so open and welcoming. In July I was in Canada and I really blew it. As is my usual practice I posted over on Twisty Puzzles that I was off and would like to meet up with any puzzlers and of course the usual request for puzzle shops. I got no takers. Now I know my friend Bob Hearn (subway shuffle) lived in Vancouver at the time I was there. I got in touch, but as luck would have it, he was off running the Western States!
I was left on my own but managed to find a museum with a few puzzles in it.

On to New Zealand. Luckily-or for me, unluckily-this trip was just one week after IPP. Lucky because Louis Puzzleman introduced me to Paul who just happens to live in Wellington! Now how do you like that! Divine hey! So we arraigned to meet up once I hit town.

The conference I was at was full on so we didn't have a chance to meet until Sunday afternoon. Paul was such a wonderful host. First he waited while the closing speeches went over time, and then he took my research partner and I to a little cafe for a nice lunch. He opened his boot and let me take a lucky dip into a box he had open and I chose both for their size. One was rather large and almost a sculpture. The other was a nicely packed rectangle.

When we got our food and sat down, I started to play. The lovely large sculpture was a 7 piece put together type puzzle. Not hard, just beautiful. The other was a sun puzzle exchanged by Jerry Slocum at IPP30 I believe.

After lunch we headed over to our hotel bar, ordered up a local beer and set about puzzling. We had two big boxes to go through, and go through them I did!

I said Paul was a great host but that's an understatement. He told stories of puzzlers and puzzles, he answered all our inane questions about property prices and income levels (retirement age is looming and my partner and I are both wanting to escape HK), but most importantly he let me play with his toys!! (I took photos of many and now have a big shopping list)

My partner asked why we did this. Cute. My reply was wish listing and cost effectiveness. Paul had a couple of the karuakuri Christmas puzzles that I'd not seen and would rather spend the money elsewhere, but could try out all the same.

Now Mr. B. isn't a puzzler, but that didn't stop us from handing over toys. I think I managed a shot or two of him playing.

I was bitten by a burr 3,4,5 made of zebra wood and something else. Got a lovely sliver from it. I didn't worry-tough girl that I am-I had puzzles to play. I got a bandage and carried on. I have to add that zebra wood is some strong stuff! I made it till almost 12 with it in my hand. It just popped out all in one piece.

Sadly we had to meet the rest of Mr. B's team for dinner so after only around three hours of fun we had to say goodbye.

I thank you again Paul for a wonderful afternoon.

Post script: I told my boss of a research connection I made in Auckland and she's sending me back down later in the year. I might just make that trip to Louis' anyway, and on the return leg will have to pop in and see Paul again if I can swing it. (for a small country, places sure are far apart!) 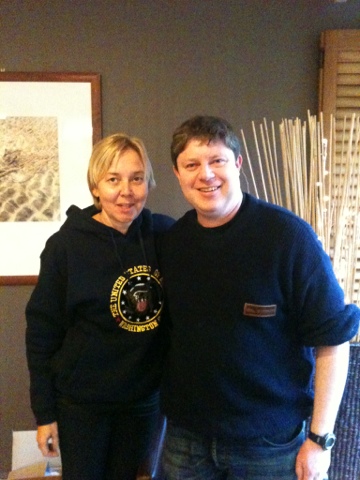 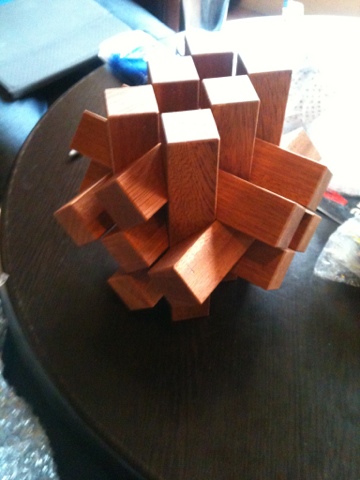 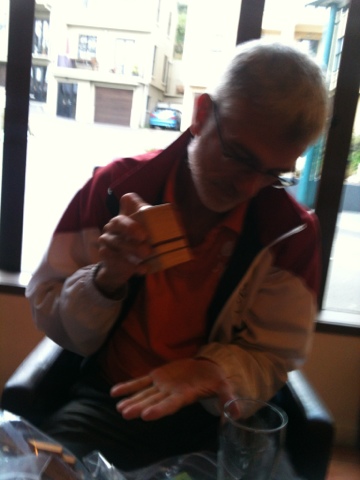 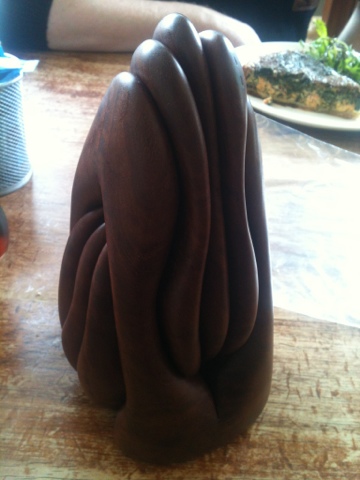 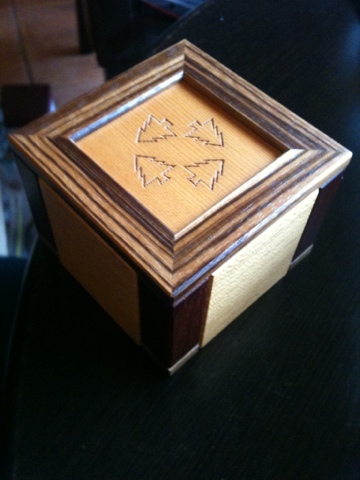 Posted by Roxanne Miller at 8:51 PM