This puzzle was exchanged by Bill Cutler at IPP 32. It's another packing joy. These things are beginning to grow on me. They really are. This one appealed to me not because it has four pretty colors, but because of the backstory that was told during the exchange and the 'in your face' albeit tactful way of asking the exchangees political leanings :) 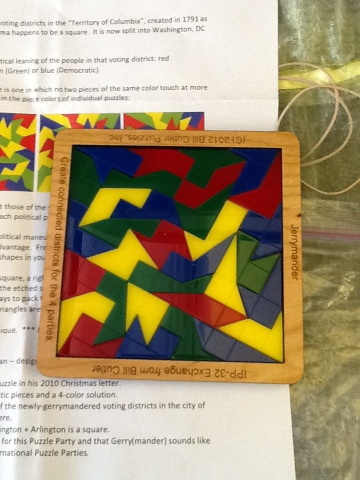 There were four different parties you could belong to: red, blue, yellow, or green. I'll let you work out which is which. The puzzle starts out with 32 pieces of the four colors with no two of the same color touching. Your goal is to redesign the voting districts to give the party in power a bigger voting block. Gerrymandering is common practice back home (elsewhere too I'm sure but am too lazy to look it up) and almost always ends up with odd little pointy bits sticking out along the edges. The color I chose is now in charge and has a bigger block.

I heard the rustle of bodies as the next feeding frenzy was upon us yet again and I bagged up this puzzle yet again.  As I ate my rabbit food and watched Big Bang I began to get a sinking feeling yet again.  I hesitated but a moment and then opened the instructions.  I knew it! I was right!  The kind of puzzle I really hate!  ONE SOLUTION ONLY!!!

Needless to say, the puzzle has not been solved, but it did entertain me on that 8 hour flight home from New Zealand.  It's a good colorful puzzle and one I'll work on again because I am sure it is only a matter of moving one or two pieces around just a tiny bit...

Posted by Roxanne Miller at 9:34 PM