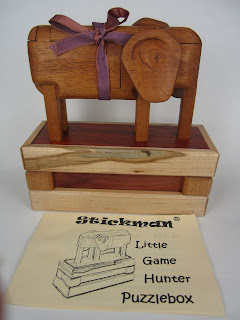 Well folks, I bit the bullet and bought a Stickman! Or I should say I was given permission to buy one.  At IPP32 I had the great joy of meeting Mr. Stickman himself.  He's not only a great builder, but a great lad as well.  Any one who met him will attest to his ability to make a person laugh, put down a drink and build one heck of a puzzle!

We started talking I guess the night before IPP and I liked him as a person.  Not just a builder.  But then I guess I like all the Renegades.  They are a fun bunch of boys.  Any way, I saw this one over on the renegade forum and read Brian's blog and  Allard's blog about it and kind of fell in lust.  I have been silly because I didn't know how to get in touch with Stickman and didn't think to leave a message or ask over on the forum (Yes, you can call me daft-I've done so many times)  Well I feel like there was some kind of divine intervention going on over at IPP this August because there he was, in the flesh, and there was not only one elephant, but two in the competition area.  (A puzzle and a spare) So one night over a beer and a cigar we started talking about my wanting to purchase one.  And that lovely man said yes!  So home with me 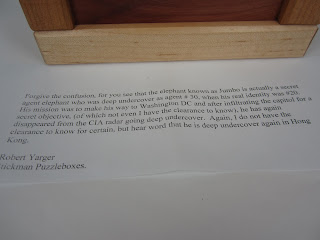 came my latest edition to my collection.  Now this was a bit of a hoot  really.  See Mr. Stickman told me that each elephant had a name and the name of mine was??? To be given at a later date.  :)  He didn't send the little book along so he didn't know.  Well a lot of back and forth and about 2 weeks later, I finally found out my elephant's name is Jumbo.  (Apparently he's well hung.  They must be tucked up inside, because it sure doesn't look like it from the photo above now does it?) 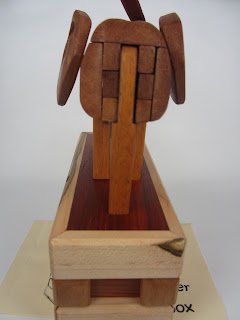 In the mean time Robert sent me this nice little note over on Renegade and also tucked it into the envelope with the puzzle book when he mailed it.  (What fantastic service!)  It seems that Jumbo is a secret agent for the CIA...Shh....don't tell anyone.  We don't want him to get in any kind of trouble.

So how does the puzzle solve?  Well I'd be telling a fib if I could answer that.  When I got home from IPP I managed to make a video of each of my puzzles from the exchange, then I had to put together a presentation and run off again so I didn't really have a chance to play.   I've managed a few moves while showing him to reporters over the past few days, but other than that, he's just sitting on my shelf looking pretty.  He'll be in an exhibition starting the end of the month, so I won't get much of a chance to even look at him.  I'm going to attempt to do something with Jumbo in the next day or two...I really want to know where he stores his bits)  If I manage to get past those first few moves I'll let you all know, but in the mean time, don't hold your breath!  You all know me.  Quick to buy, slow to solve.