Today we were supposed to disembark in Guatamala. Sadly because of a few cases of COVID on board they have denied us entry.  This is now our second sea day.  By the time we hit San Diego we will have been at sea for six days.  Speaking with some of our fellow passengers, they will be eager to get off the ship.

We went to the Polo Grill last night for dinner.  Our want is to share a table except on George’s birthday and our anniversary so last night we met some lovely ladies.  One was from Nevada and the other from British Columbia.  They are both widowed and extensively traveled.  What I thought funny was the choice of steak temperatures.  The US gal chose to have hers well done (burnt to leather by my standards), the one from BC (originally from Austria) chose to have hers "extra rare", George had his rare.  Me? I had lobster.  Anyway, we had a conversation about steak temperatures and the girl from BC told me she was shocked that Americans didn’t eat their steaks blue. "It’s normal in Europe.  Americans ruin the meat." Or something along those lines.  Don’t quote me but I am close.  I had to chuckle over this because of a recent conversation on my eating blue steak.  I guess it comes down to upbringing.  My father ate his steaks seared only, LBJ famously quoted "Cut off it’s horns, and wipe its ass" when asked how he wanted his steak cooked.  Had I grown up in a family that liked well done steaks I would like mine differently.

The lobster was ok, but not as I would have expected.  It was just bland.  I ordered it with drawn butter and lemon.  The butter was unsalted, perhaps that had something to do with my lack of thorough enjoyment.  The foil gras was an acquired taste.  It was wrapped in a filo dough and stuffed with a chopped mushroom.  Normally I love mushrooms, but after a few bites, I just couldn’t eat any more.  I felt guilty stopping, but am glad I did.  I think I may have had an allergic reaction to them. I spent the better part of the night awake, and feeling miserable.  One can tell what makes one sick, and it was that mushroom.  After um…an unfortunate visit with the porcelain god, I felt better.  Note to self: stay away from that dish in future.  The escargot was lovely as well, but the real star of the night for me was the truffle mashed potatoes.  Oh! They were divine!  Full of flavor. I’ll be ordering it again tomorrow night.

This morning, I awoke at 7:30 and read emails and the news as is usual.  George did his exercise in the room and we just enjoyed a very lazy morning.  I ordered our usual breakfast room service of orange juice and 2 glasses of milk.  Today the milk came not in a glass, but in two of those coffee creamer holders.  I don’t know if they ran out of glasses, or exactly what they thought.  They did give me two cups to go along with it.  It gave us a nice chuckle.  This is one thing I am having a hard time getting used to.  Skim milk.  At home I drink fat free milk and boy can I taste the difference.  So much so that in San Diego we are going to purchase a gallon for me and store it in the fridge.  We don’t drink soft drinks so I may as well have them removed and use the fridge for something we like.

I made a few more puzzles this morning.  A few tetrahedal and cubic dissections, and a chicken business card puzzle.  I am really having fun with this little printer we brought along.  It’s a real joy for me to finally understand how to at least use the slicer program and print ready made files. The next lesson of course is how to use the CAD (computer aided design) program and start designing my own puzzles.  I’m going to guess I’ll go for flat packing puzzles at first.  Thea seems to me to be the easiest type. 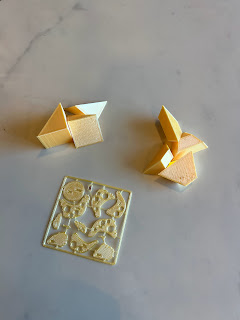 I made a mistake on one of the puzzles and had moved the filament to the side.  Guess what happened? Misprint! That is an easy problem to solve.  Just move the filament. For as small as this printer is though, it does have good resolution. Most puzzles are ready to play with a minor bit of nail filing of the rough edges.  When we get to San Diego, I'm going to buy a 'tool kit' so I can clean up the puzzles a bit easier.  I plan to be doing a lot of puzzle making along the way. 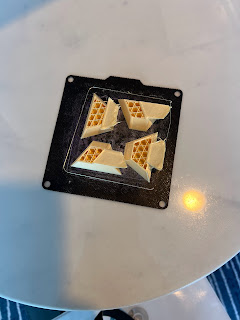 We decided upon room service for lunch today and enjoyed it on the veranda.  At noon I went back into the room to listen to the location and daily announcements only to hear that on New Year’s Eve and New Year’s Day there will be open bar all day long as a form of compensation for missed ports and what have you. There is even a complimentary designated driver.  A younger me would have heard this and shouted from the rooftops.  Now all I did was turn to my husband and say I guess I don’t need to chill the bottle of champagne for tomorrow night. 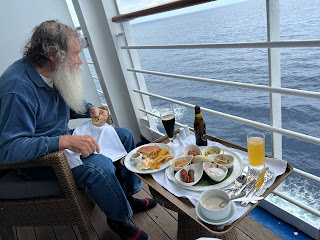 In the afternoon I printed another puzzle and just watched the world go by.  The view of the ocean is just wonderful.  It’s amazing how vast it is.  Right to the horizon.  I can understand why ancient man thought the world was flat.  What a terrifying thought it must have been for those intrepid sailors of old.

There are often birds that fly along the ship and I have been entertained by them all day today.  They often come in pairs and seem to be having a spat.  They fly squawking towards each other and then plop! They drop into the water, rest for a bit and fly on.  I guess that noise they are making is there way of telling their partner they need a short break.

We have also seen a few large fish break through the waves.  They jump so fast and return just as quickly.  We aren’t sure what kind they are but have kept our eyes open trying to see more.

This having only one internet access per stateroom is for the birds.  I can’t get the kindle to download any new books so I’m feeling frustrated.  George is programming and whenever he runs into a problem I have to logout so he can find a solution.  I don’t begrudge him this at all and am very glad we have access.  It’s just causing problems with the kindle download.  Perhaps when we get to San Diego I’ll find a free wifi spot and do it there.  *Problem solved. I was attempting to log into my Amazon Japan account.  When I got the US account it loaded easily and I now have books to read.*

I have the bridge camera on and it’s the funniest thing to watch.  I enjoy seeing the birds fly in front of the ship, but even more enjoyable is the sailors painting the boat.  I’ve watched them paint all the rails not once, but twice now.  I think once they finish, they just start again.

We had dinner in the grand dining room again tonight  During dinner we sat with a nice couple from Southern California.  They told us their nephew wanted to buy a 3D printer so I brought out the 2 piece pyramid I had just printed and let them have a go. Failure was followed by showing them the solution and gifting them the piece.  I also wrote down the name of the machine for them to pass on.  One of the waiters surprised me by telling me he brought up my sugar cone for dessert.  He remembered.  This is always a nice little treat.  I also like it when we come into the dining room and are greeted by name by all the staff.  It doesn't seem to take them long to remember names.  When I was teaching I took until the end of each semester.

We returned to our cabin went to sleep. Just another lazy sea day.

When we woke in the morning the seas were calm.  They are just like glass.  The only movement seems to be from the ship cutting through the waters. 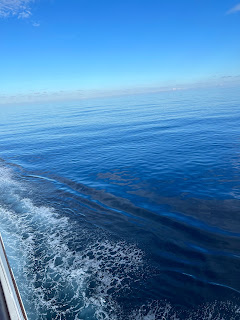 I guess they call it the Pacific for a reason.  George reminded me of the old sailing ships and the doldrums that they had to endure.  I can only imagine how depressing it would be to be stuck on a ship in the middle of the ocean with no where to go. 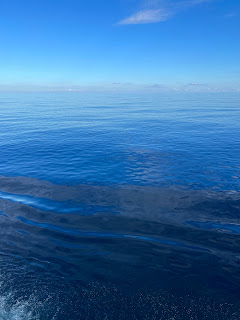 And reading this mornings news and boards and groups about the cruise industry, you can see just how ironic that last bit was.  It appears that the CDC is again advising against cruising.  It seems to me that it is safer here than on land. No one has tried to shut down the airlines, but I’m guessing they have more clout in the places that make decisions.  I’ve said it before but it would be good to post again.  We live in a community of approximately 400 families.  Of these, in the first week we were gone I counted 20 notifications of family groups that contracted covid and another 27 staff members in our little community.  That is higher than the CDC threshold for investigation into a cruise ship.  But then we live in Florida and there COVID is just brushed under the rug isn’t it?  Ok. Ok.  I won’t get political.

Last night we set our clocks back another hour.  We’ve lost 2 now. By the time we get back to New York I’ll be one day younger.  This makes me wonder how many days I’ve gained and lost in my life by traveling back and forth to Asia.  I guess it balances out in the end.

Tonight is New Year’s Eve and my mind can’t help but wonder how many will take advantage of that open bar.  I thought this was a special thing they were doing, but it appears that the open bar is being held on all Oceania ships. Good for the company for doing this.  These are trying times at best and any little gesture goes a long way.  Having said that though, there are those who want compensation for their alcohol packages. You can’t please everyone can you?

Well, it’s time for me to get dressed and go to a yoga class.  Until I post again, I hope we all have a healthy, happy, and prosperous New Year.

Email ThisBlogThis!Share to TwitterShare to FacebookShare to Pinterest
Labels: Around the World Cruise